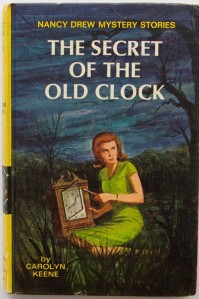 One of the things that you need to do in your query letter is show the agent that you know something about the market.  Many writers do this by comparing their work to a book that is already in print.

As with everything, there is a right way to do this and a wrong way to do this.  Do not state that your book will be the next Harry Potter/Nancy Drew/Little House on the Prairie.  While everyone wants to be wildly successful, you don’t want the agent to just roll his eyes and then delete your query or send you the dreaded “good luck in finding representation elsewhere.”

The book that you chose to compare to your own should also be current.  That’s part of the problem with Nancy Drew and Little House.  Yes, I loved them.  Yes, I read them all.  But they were published then and this is now.  You want to show the agent that you’ve read something recent and that you know the market.

These comparisons wouldn’t tell your target agent anything about your book.  They would just tell her something not altogether positive about you.

Instead, make a comparison, using a contemporary title, that hints at your book.  “My book has the same fantasy meets the Wild West feel as Rebel of the Sands.”  “Like Ronan in the Raven Boys, Jed is abrasive but compelling.”  This doesn’t say that my book will be an international seller like Rebel of the Sands.  I’m not claiming to have the same series potential as The Raven Boys.  But I am telling the agent something about the feel of the book.  In doing so, I’m also making her aware that fans of the popular book may also like mine.

Comparing your book to a successful, current title isn’t an easy task to do well but it is something that will tell the agent about both you and the manuscript.  Just make sure that it sends the message you intend.