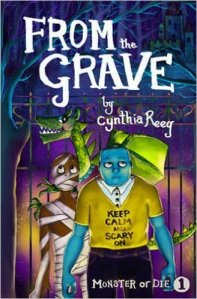 Happy Halloween all you book lovers!   I’m happy to say that my Halloween post is about a book coming back From the Grave.

The week of 10/16 was the week my friend Cynthia Reeg’s first children’s book was set to debut.  Sadly, the day before it would officially be released, Cindy got word from her editor.  The publisher was closing down.  Her book would not be officially released.  Cindy had school visits scheduled.  She has planned a bit costume party for Saturday.

At the party, she told me how worried she was.  Yes, she was upset about her book but Cindy was worried about her editor.  After all, he was a great editor and now he was out of a job.  Typical Cindy!

But there is good news.  Jolly Fish, Cindy’s original publisher, was acquired by North Star Editions.  Her Monster Or Die series is officially under the Flux imprint with production starting immediately.  This is an amazing book about being true to yourself even when the world seems set against you.  I know — that seems a little ironic all things considered.

The point of this post.  Don’t give up.  Things have a scary way of working out.  Monster on!

Do not give up.