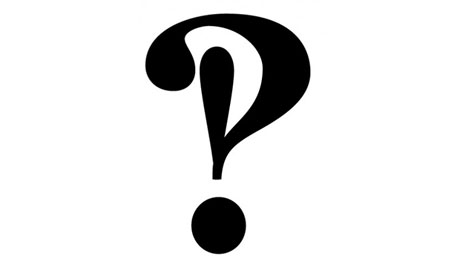 Tell me — am I the only writer who was unaware of the interrobang?  That’s it over there on the right.  It is a nonstandard punctuation mark (something else I didn’t know existed) that is used to mark an exclamatory interrogative.  You know like “What the heck,” only my seventeen-year-old did not say heck.

It was created in 1962 by Martin Speckter, editor the magazine Type Talks. He dreamed it up for advertising copywriters who needed it for those rhetorical questions they like to write into ads (“What?! Whiter than White?!”).  It is to be used in those instances when neither an exclamation point nor a question mark alone convey the full meaning.

Maybe it’s just because I’m a word nerd but I think this is pretty cool.  I feel like I’m teetering on the edge of a Frindle moment.  In Frindle by Andrew Clements, fifth grader Nick Allen decides to change the English language by getting everyone in his class to call an ink pen a Frindle.  His teacher thinks it is nonsense but soon it has spread beyond his class and other people in their town are asking for frindle when they need to sign their name.  I have to admit, this is my absolute favorite Clement book.

Now I can only participate in the interrobang revolution if I can figure out how to type one.  Fortunately, I’m a researcher so I found out how.  I use a Windows driven PC so I hold down ALT and type  8253 and up pops this — ‽.

Now, if you’ll excuse me, I’m going to go interrobang some unsuspecting soul…