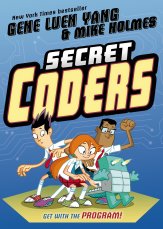 On Monday, the Library of Congress named graphic novel/comic book author Gene Luen Yang as the national ambassador for young people’s literature. The position was created by the library in 2008 and Yang is the first graphic novel author to receive the honor.  Previous ambassadors include Walter Dean Myers, Katherine Patterson, and Jon Scieszka.

As ambassador, Yang will promote Reading Without Walls.  The program, co-sponsored by the Children’s Reading Council and First Second Books, one of Yang’s publishers, seeks to promote reading beyond your comfort zone.  Says Yang, ““A huge part of being a kid is exploring the world,” he said. “Books are a bridge between them and what might be unfamiliar.”

For his own writing, Yang draws on his experiences as a first generation Chinese American.  Even his super-hero books draw on this.  When he wrote about Superman, he gave the Man of Steel immigrant-like anxieties about fitting in.  Yang explains that dual identities are the norm for many children of immigrants. “Many of us use one name at home, another at school,” he said. “We move between two different sets of expectations the way many superheroes do.”

If you haven’t read Yang’s work, I’d encourage you to stop by your library.  I’d already read Boxers and Saints.  As much as I loved finding graphic novels depicting Chinese history, knowing the history made them a difficult read.  It was like watching Dances with Wolves if you know American history.  I’ve requested both Secrete Coders and The Shadow Hero from my library.

I’m thrilled to see this honor given to someone from the world of graphic novels.  While they aren’t my favorite things on the planet, my son adores them.  90% of his recreational reading comes in this format.  I’m glad the Library of Congress takes young people seriously enough to give this honor to someone who creates literature that pulls young readers in.