That’s what I managed to get read during May.  Not what I had hoped to accomplish but let’s just say that I started a number of books that I never finished.  If I writer wants to keep me with them from beginning to end, they better surprise me.  And if it feels predictable, I’m going to guess the ending, flip to the chapter or spread and see if I was right.  If 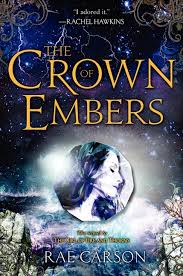 so, I probably won’t finish the book.

The funny thing is that one of the books that surprised me the most was a bed time book.  I’m talking about Nighttime Ninja by Barbara DaCosta and illustrated by Ed Young   (Little Brown and Company). First things first, it was a bedtime book.  Ask an editor what they are sick of seeing and what is going to be a hard sell and they will most likely include bed time books on their list.

The twist here?  It’s a bed time book but you don’t know that until very near the end.  Why?  Because you’re reading about a ninja stealing through the darkened house on a mission.  You don’t figure out what is going on until someone flips on a light.  And, no.  He isn’t dreaming.

Another book that surprised me was The Crown of Embers by Rae Carson.  At some point in the story, it becomes obvious that someone is a traitor, continually endangering the young queen’s life.  If you are anything like me, you spend quite a bit of time trying to figure out who it is and this time around I was completely surprised.  Yes, there have to be clues but don’t make them too obvious.  Otherwise your ending will still be predictable.  This one was not.

If you want to keep a reader, whether that person is an agent, an editor or the buyer of your book, turning pages.  You have to surprise them.