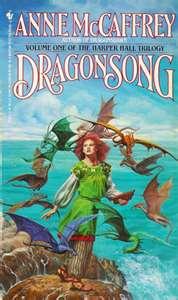 I never know what I’m going to find when I pop over to Wendie Old’s blog, Wendie’s Wanderings, but what I didn’t expect to find one day last week was an obit for one of my favorite authors — Anne McCaffrey.

I latched onto McCaffrey as a teen, reading first the Harper Hall books and then moving on to the Dragonriders of Pern books.  My mother knew that if I was holding a Pern book, speaking to me was pointless.  But I don’t think it bothered her.  Otherwise, why would she have continued to give the books as gifts to both my husband and I?

And she didn’t make a big deal out of this diversity.  It wasn’t something she pointed out or lauded herself for.  No.  The characters were simply there — doing their jobs, fighting to gain their deepest desires.  Living and loving.  No explanations needed.

As a teen, I read her books without realizing everything that was in them.  It wasn’t until another writer, Wendie Old, pointed some of it out to me that I went back and read McCaffrey’s work as a writer.

Why not pick up a childhood favorite and see what stands out now that you have learned a bit about how to pull together a top notch story?

2 thoughts on “Anne McCaffrey: Her influence on readers and authors”