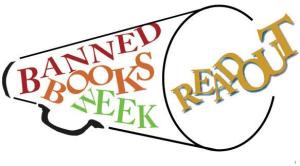 For those of you who have never been in on a discussion about book banning and censorship, banning does not mean telling your 7 year-old that she is too young for Twilight.  That’s parenting.

Banning is trying to limit access to a book at a school or library.  It happens every day in every state.  Don’t believe me?  Check out this map for some examples of banning which may hit very close to home.  I even found a case in my home town.  ::sniff::

Personally, I wonder about the wisdom of adults who don’t want children exposed to X, Y or Z and then raise a big stink about it.  Why?  Because when I was a tween or teen, this would have sent me running to find a copy of the book.  Come on.  Admit it.  How many of you read Wifey after someone’s mom forbade it?  I’m sure my friend’s mother wondered where her copy had been after the entire 8th grade got done with it.

Why not join me in observing Banned Book week by reading one of the top ten most challenged books of 2009?  There’s quite a list to choose from.  The books in red I’ve already read.

And Tango Makes Three, by Peter Parnell and Justin Richardson for homosexuality.

To Kill A Mockingbird, by Harper Lee  for offensive language, racism, unsuited to age group

Catcher in the Rye, by J.D. Salinger for offensive language, sexually explicit, unsuited to age group.

The Earth, My Butt, and Other Big, Round Things, by Carolyn Mackler for offensive language, sexually explicit, unsuited to age group

I clearly read banned books.  Do you?