I know I’ve said it before — writers write.  That’s what makes you a writer.

Of course, it also means that some days, like when your kiddo stays home sick from school, it is very hard to feel like a writer because you get very little writing done.  Sure, I rewrote a brochure but that was it.

But look what the UPS man brought me — author’s copies!

These are the first of the Gryphon House books that contain my activities.  So even though I didn’t get much actual writing done, I must be an author.  I have the copies to prove it.

Who should be able to write a particular story?

Should a Caucasian author be able to write a story set in China?  With an African-American character?  Very often, editors, publishers and readers will answer “no,” which differs from the  response in Renee Ting’s blog post, “Author Authenticity and the Right to Write.” Ting is an author as well as the publisher at Shen’s Books, a company that specializes in multicultural titles.

In part, Ting had this to say:

“. . . I do not agree that any one group of people has more of a right to tell a story than another. I do not believe in looking at the author’s name before judging the quality of a book (and even if I did, what would that tell me, in this day and age?). I urge authors to write on whatever subjects most move you, and from the point of view that most moves you.”

Part of the reason that I find this debate so interesting is because I didn’t come to writing for children with a background in education, English or journalism.  My background is anthropology and we were taught that an anthropologist probably cannot write with accuracy about their own culture.  Why?  They are simply too close to it.   They accept their own cultural values without question.  They have simply internalized too much to do otherwise.

Not that I found what we were supposed to accept as fact must better.  As anthropology students, we were supposed to take the work of European anthropologists working in Asia or Africa as TRUTH.  But why?  How could they claim to bring us the perspective of an entire society, simply because they had lived and worked in one Chinese village, on one Pacific island or with one group within an Kung tribe?  When was the last time that everyone in a room, let alone a city or society all agreed on any one thing?  Yet, these anthropologists and authors and editors writing about cultural authenticity often write as if people within a group were of a single mind.  I just don’t buy it.

My own take on author authenticity is this:  If a story is too close to you, you may not be able to do it justice.  You’ll have great big blind spots.  That said, if you are writing about another cultural group, you can’t write as an outsider.  You need to find a way into the story.  You need to become familiar with the people and the culture.   You need to be aware of your own biases as well as those of your sources.  Doing any story justice is a great deal of work as you struggle to get inside that character’s head.  And you also need to be aware of the fact that you are writing one story and only one story from one character’s POV.  Another writer, writing from another character’s POV, would write an altogether different story.  You aren’t the voice of an entire society any more than any politician, newscaster or bloggers speaks for an entire society.

No one can do anything more. 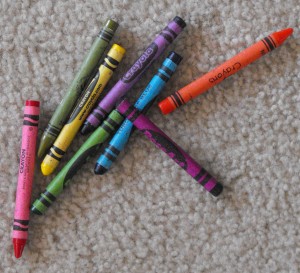 I was reading a fun blog called How About Orange when I came across a posting about the True Value Paint Color Quiz.  Now, you might expect that a person who loves the color orange would take this quiz and score “orange.”

Nope, she got black.

Curious, I popped over and gave it a try.

Black.  Maybe this is what creative types tend to score?  Why don’t you take it and find out?

I did have to laugh at parts of the write up for “Black is Your Color,” especially this sentence:  Nothing can stand between you and your demand for a calm environment.

Oh, I don’ t know about that.  My ten-year-old and his buddies do a pretty good job.

They were pretty spot on about my ability to concentrate though or I probably wouldn’t be able to earn a living at this writing stuff.

If you do take the quiz, let me know what color you got!

The picture book market seems to be picking up — if nothing else, you aren’t hearing as many dire comments.  “Do Not Send Us Picture Books!”  Nope.  Not nearly as often.

But it does seem that the small and medium-sized publishers, the ones listed less often in the market listings, offer more opportunities to authors who may not already be a household name.

Fortunately author Nancy Kelly Allen has pulled together a list of small and medium-sized publishers which she has posted on her blog.  Look at the menu on the right side of the page.  Don’t skip this resource because you think she means fly-by-night companies.  This list includes reputable publishers of all kinds including Boyds Mills and Chronicle and Charlesbridge.

Thank you, Nancy!   We appreciate your efforts.

Brochure design takes up some serious time and doesn’t do much to add to your work count.   That said, I did manage to write 5455 words this week.  Not quite my 6000 word goal, but close.

As far as individual projects go:

What are my goals for this week:

Fingers crossed that this week is productive.  Hope you are all meeting your goals!

Just a quick post to let everyone know that my interview with Simone Elkeles is up at WOW! Women on Writing in the February/Romance issue.

Simone is a wonderfully inspirational writer and, in the course of the interview, managed to encourage my attempts at a YA romance.  Guess I better get cranking on it!

Note:  Registrations for Agent’s Day must be in by the end of this month!

Agent’s Day is coming up on March 20 and I’ve had several people ask me how to prep for this event.

First and foremost, this is just like any other conference so act like a professional.  Don’t shake your head!  I’ve actually had to keep people from following editors to the bathroom.  And I’ve heard of people trying to pass their manuscripts under the stall door.  Unbelievable!

Will the agent ask for your manuscript on the spot?  Most likely not, because everything they are handed on site has to be carried back home.   If the agent wants to see your work, they will most likely want you to send it to them when they get back to the office.   This means that if the agent asks what you are working on, you need to have what they call “an elevator pitch” ready.

Step 1:  Have a finished manuscript to pitch.  Finished.  The end.  That way they know you can.

Step 2:  Check the agents out ahead of time — Kelly Sonnack; Stephen Fraser; and Ammi Joan Paquette.

Step 3:  Be prepared to pitch your story in one or two sentence.  1 or 2 Sentences.  Translation:  Keep is short and to the point but get across what the story is about, the conflict and how it stands out from the crowd.

That last step is actually a doozy but others have written about it so check out the following:

How to Pitch to an Agent as a Writer’s Conference

Scoring in the Elevator

Creating an Elevator Pitch for Your Market Platform

How deep do you go with your characterization.  Do you rely on stock characters?  Or, in your writing, do characters have a lot in common when, superficially at least, this seems unlikely?   This is, after all, how it works in real life.

This is something I’ve been considering since I realized how much my husband has in common with a friend of ours.  When I first mention this to people who know them both, I get some funny looks.  You see — at  first glance, it doesn’t seem likely.  I can see what it is that is tripping people up — appearance.  My husband is the out-doors model — think Grizzly Adams or the guy you run into at Cabelas.  The other, definitely GQ.   And it goes beyond appearance because their musical tastes, hobbies and jobs are very different too.

But when you pay attention to them, they are a lot alike.  Both are people watchers, they value the same things, and they both come through and help people in quiet unassuming ways.  Not to mention that one of our cats is torn about who to lavish with attention when they are both here.

Lauren Myracle reflected this kind of reality in Love, Peace and Baby Ducks. Carly, her main character, differs in many ways from the other rich kids she knows.  They value different things, they dress differently and their goals very seldom mesh.  Though their backgrounds are nearly identical, they are very different.

When Carly meets a boy who likes the same music she does, whose values aren’t mainstream and who has a similar offbeat sense of humor, she’s sure she’s found her soul mate.  And it doesn’t hurt that he’s fabulous eye candy.  But letting this work would be too easy and Myracle likes to make things tough for her characters.  When Carly gets to know this boy better, she realizes how very different their values truly are.  Instead she eventually connects with her best male friend.  They come from different countries, they don’t like the same music and they are different in oh so many ways.  But in the ones that are important, they connect.

Take a look at this book for a lesson on taking your characterization more than skin deep. 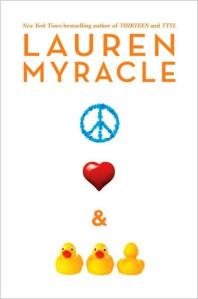 Just a quick heads up to let you know that I’ve posted a book review on my other blog of Lauren Myracle’s Peace, Love and Baby Ducks.

As an author, I loved the way that the various subplots tie into the plot in oh so subtle ways as well as the complexity of her characters.

Some of the following may be a spoiler if you want to come back after you read the book.

At the beginning of the book, it was easy to side with Carly against her oh-so materialistic parents, but by the end of the book, you can see Dad’s POV.  He has become a true-blue 3-D character.  Myracle didn’t cheat by giving Dad values that mesh neatly with Carly’s.  They are still going to butt heads on a regular basis; they’re just too much alike not to.  But they also realize how alike they are and each have a deeper appreciation of the other.   Because we now know why Dad feels the way he does, we get it even if we don’t like it.

Make your adult characters 3-D even if they aren’t entirely sympathetic.  Otherwise you’ll find editors complaining about your cast of card-board cut outs.

There seem to be two types of writers:

There are benefits to each approach:

There are also drawbacks to each approach:

It probably comes as no surprise but I’m in the first category.  I’ve been known to take a first draft to critique group if I want to make sure the concept has any merit before I polish the piece.  I never outline a picture book before I write and most nonfiction comes together in the first draft.  Or the fifth, the point being that I don’t outline that either.

Which category do you fall into?